May 18, 2020 – Posted Under: Merrily's Items of Interest Comments Off on RIP Phyllis George Brown and Mount St. Helens 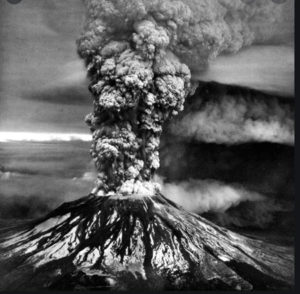 Phyllis George Brown was everyone’s Miss America, and she was adored in Kentucky where she advocated for the arts and women’s crafts that had a material value, thus bringing income to rural areas where previously there was only coal or farming. In the early 80’s I was in attendance at an event for businesswomen in Louisville where Phyllis George Brown made an appearance, a talk, and, at her request, spent some time with Louisville’s top businesswomen.

This particular event was written about in a long and detailed article that a New York magazine was writing on her. A writer had been dispatched to accompany Phyllis for several events over an extended time period. Overall the article was not complimentary, unfortunately. What Phyllis considered as being funny or using her beauty as an attention-getter, something that Kentuckians loved, the writer found non-professional and unbecoming behavior for a First Lady. Plus, there was some NYC versus the rural south angst in the mix as well.

In her planned remarks, given from the center of a circle of adoring women in business suits (skirts, not pants, as this was early 80’s), Phyllis first slowly pirouetted in her chocolate brown, buttery soft, all leather, skin-tight suit, showing off her new figure after losing extra baby pounds. She then told us a story of advice her father gave her as a young woman. We listened raptly, hanging on every word as she acted out the roles of her father and herself in conversation. His sage advice, delivered with a climactic ending, was to go out into the world, and always remember, “Knockers up.”

We were all sort of astounded. To this day I am still not certain if she meant that to be a joke or if she really thought that was the secret to her success (which, it might have been, in part, at least in the very beginning). But, the reason I bring this not-so-pleasant story up today is that I finally understand what he meant. After all, she was Miss America in 1971. Her father was telling her to use what she had to use to get noticed and to get where she wanted to go. And, she certainly did what she wanted and also helped people along the way.

Today is the 39th anniversary of my starting my own business. It is also the 40th anniversary of the explosion of Mt. St. Helens. Those events have me reflecting on lessons learned throughout these 39 years, I think that Phyllis’ father got it right. Stand up straight and tall and just go forth proudly. And show the world what you got. RIP Phyllis George Brown.