Ken Dychtwald first appeared on the gerontology scene in 1973, and since then had consistently told the same story: we are a changing society and the boomer generation, those born between 1946 and 1964, have changed society and will continue to change it as we age. Dychtwald spoke at the general session of the 30th annual National Association for Home Care & Hospice meeting yesterday, and, once again repeated, reinforced and emphasized what the aging of our society means. He said that we have created a health care system that was not designed to work, and that throwing more money at it is not the answer.

Dychtwald says that 1) we are in a longevity revolution. Take a look at these two charts if you do not believe that one.  Two thirds of all the people who have lived past 65 are alive right now. Think about that. The first chart shows the life expectancy at birth for the last 1000 years. Hard to read photo, but you can see the trends. 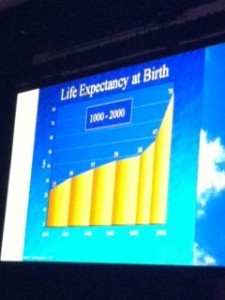 Now take a look at THIS photo which is of the chart of the life expectancy at birth for the last 100,000 years. WOW. 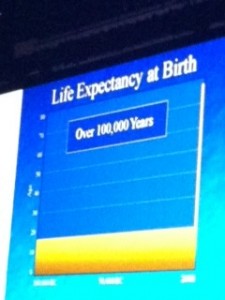 His other points are that we are experiencing massive population shifts, that the boomers are a “new old” and will be more demanding and questioning than the current old people, that we will have a caregiving crunch as the boomers age and that we need to chart a path towards healthy aging.

Solutions? Dychtwald suggested that we steer science in a new direction, one that would solve the chronic issues of again, specifically Alzheimer’s. Since 47% of those people over 85 have a dementia. And, look around, that means if it is not me then it is you. He says we need to champion and motivate a healthier society. We need to prepare medical practices for the demanding and soon to be ailing age wave. We need to better understand and offer palliative care when appropriate. And we need to guide public policy toward a healthy aging.

His parting words? “Demography is destiny.”

Find out more about Merrily's Help Choose Home podcast series and suggest a topic or guest for a future episode.