September 13, 2010 – Posted Under: Merrily's Items of Interest Comments Off on Gas Pump Marketing: A New Strategy that Works!

The ultimate long term marketing strategy: Richie Farmer running for governor in Kentucky with his name on every single gas pump in the commonwealth. As I was gassing up on Saturday, I noticed the sticker, at eye level, on the gas pump. It was an outline of the commonwealth of Kentucky, and in large letters was written “Richie Farmer”. Wow, I thought. What a great marketing idea! First you become a basketball star for UK (not a small feat, and being named Mr. Basketball to boot), then, later on you run for agriculture commissioner as a political novice. This position, although elected, is not one that would cause much controversy or even conversation.

Now Richie may know a whole lot about agriculture in Kentucky, but, being a UK star probably did more to get him elected than anything else. And, now, he is running for governor. From a long term strategic standpoint, that agriculture position, and the potential for name recognition among anyone who operates a gas powered vehicle, is priceless. Whether or not the ticket is a good winning one for Kentucky, only the voters will determine that. But, for the time being, Mr. Farmer can rest assured that his name is prominently in front of probably 90% of Kentucky voters each and every time they gas up. Talk about smart marketing and a long term strategy. My  hat goes off to that creative and innovative planning. 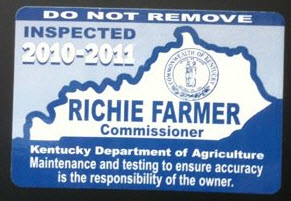 Want some creative, innovative and targeted ideas that work? corecubed specializes in internet marketing, and we tie in great design and implementation so, if there is a gas pump idea out there, we just may have it working for you!